Rehearsals for Postcards at the Ice Box 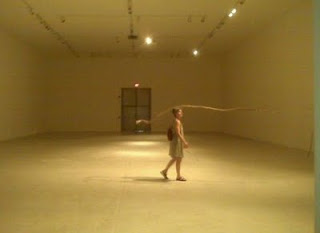 I’ve lost track of how many branch dances I’ve made since I started the practice of dancing with branches. Beyond the numerous park pieces, which include dozens of solo “guerilla” performances, there have been many dances for the stage, some solo, some group, some with and without live music and/or projections. You see, it’s a practice, something one performs/practices over and over again (so its easy to lose count).

Part of the beauty of the branch dancing is that it always changes and thus it keeps one flexible, helps one practice non-attachment. And yet because the practice is always the same — to pay attention, to connect — the dances are all similar. Always similar but always different, as every moment is different. And different because each branch, every performance space, each performer(s) has its/his/her own exigencies which in turn establish new parameters for the dances. 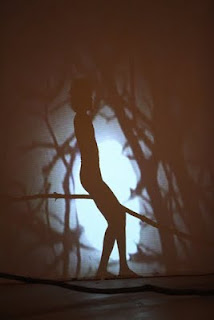 A case in point is Postcards from the Woods, the newest edition in the Branch Dance series, to be presented at The Ice Box, 1400 N American St., Philadelphia, as part of the Live Arts Festival in September (for details go to the Live Arts web site: http://www.livearts-fringe.org/details.cfm?id=8372)

The Ice Box is a big white rectangular space--- http://www.cranearts.com/?page_id=11 Wanting to work with the long thin tree trunks we had found at Silo last March, and knowing that only a space like this could permit this (they simply don’t fit in a most spaces), we had decided to work with these at The Ice Box. I had also been developing work utilizing video images projected side by side, carefully studying the space between the images. However, the various plans and ideas for how to inhabit the space were quickly abandoned once we were working in it. After just one day in the space it was clear that we I needed to go back to the drawing board. Once we were practicing in the space it felt important to acknowledge the large emptiness of the space free of clutter. The video concept that I had been developing all spring in proscenium situations would now have to be transformed for the round. 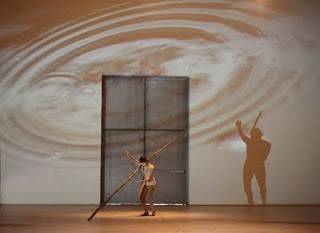 Luckily the artists I work with, Noemí Segarra, Jumatatu Poe, and Olive Prince, are not only exquisite dancers, they are flexible and open and willing to try new things. The artists working on tech—Laura Zimmerman, Leigh Mumford, and Cicada Brokaw, were equally responsive.

In truth I was not surprised by this turn of events. As I stated before the experience of working with the branches has shown the need to be responsive in the present. But I was surprised by the fact that this particular work feels closer to the park performance experience than any of the proscenium dances I have created thus far. Going into the experience I had anticipated that placing and controlling the work within a visual art space it would somehow become a visual experience, that each dancer would be distinctly separate from the others. In fact, the space and the gigantic branches defined a different outcome. As in the park performances the audience can move around us to view us from different vantage points. It has brought back the original consciousness of performativity as occurring simply and directly as a result of the awareness of being seen. From audience responses to the work, it feels that more so that in the park performances the audience becomes aware of themselves as being seen, of being part of the performance.

I want to take this opportunity to thank those who attended the showing on Friday, August 8. Not only was your feedback was enormously helpful, it was also incredibly satisfying to learn that the worked moved you and touched you. Very satisfying! 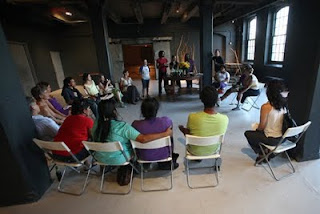 Posted by Merian Soto Performance Practice at 6:36 AM 2 comments: 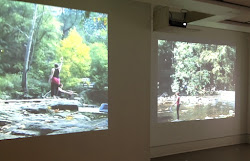